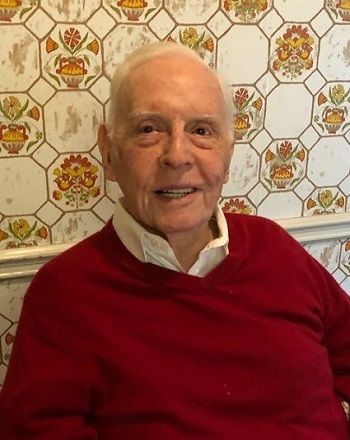 Born in Weehawken NJ on July 27, 1926, he graduated from Stevens Hoboken Academy in 1944 and joined the Army, serving in Germany just after World War II ended and was honorably discharged in 1946. He obtained his AB in Economics from Lafayette College in 1951 where he was a member of Kappa Delta Rho.

After graduating, Harry joined Morgan Guaranty Trust in New York City in their Trusts and Estates Division. Four years later he joined his father at the Concrete Steel Company as Assistant Treasurer, eventually becoming Treasurer and then President & Chairman of the firm in 1969. Concrete Steel, founded in 1919, fabricated reinforcing bars and many of them are in New York’s landmark buildings and roads. The company and Mr. Bahr were active participants in their industry organization, the Concrete Reinforcing Steel Institute, battling industry consolidation, the introduction of Japanese steel in the 1970s and the myriad hurdles a small business must surmount. Mr. Bahr ran the company until liquidation in July 2008, selling out months before the Great Recession.

In 1956 the family moved to Bronxville NY and Harry became active in the Village Vagabonds and the Young Adult Group at the Dutch Reformed Church of Bronxville where he met Elizabeth Annesley McLaughlin, whom he married in March 1957. In 1958 and 1961 the pair was joined by Ted and Pam forming the classic nuclear family. The family was active in the church and Harry taught Sunday School classes of 7th and 9th graders from the late 1950’s until 1971.

Idyllic summer vacations were spent first at the Essex & Sussex Hotel in Spring Lake, NJ and later the Grey Rocks Resort in Canada’s Laurentian mountains and the Basin Harbor Club in Basin Harbor VT. But nothing would surmount crisscrossing the country by train. Ahhh, trains, Harry Bahr’s true passion. From the O-Gauge sets as a child to precision-modeling and painting of HO brass engines and hand-built balsa freight cars, his workshop turned out masterpiece after masterpiece, eventually filling every room in the house.

A life member of the University Club of New York, and a member of the Bronxville Field Club, he will be remembered for his wide smile which would break across his face like a laughing sun, absorbing all in its mirth, his hearty laugh and perfect penmanship, a lost art today.

Mr. Bahr is survived by his son, Ted Bahr (Rebecca) of Oyster Bay NY, his daughter, Pamela Hambley (Marc) of Hingham MA, and grandchildren Emily Bahr of Marina Del Rey CA, Charlotte Hambley of Boston, Olivia Dillner (Brian), of Greenlawn NY, Eric Hambley of Boston, Peter Bahr of New York City and great-grandchild Margaret Mae Dillner. In lieu of flowers, donations may be sent to the Reformed Church of Bronxville. A Memorial Service will be held at Fred H. McGrath & Son Funeral Home, Bronxville on Friday, May 6, 2022 at 11:30am.